Home Gaming How to Deal with Error Code Weasel in Destiny 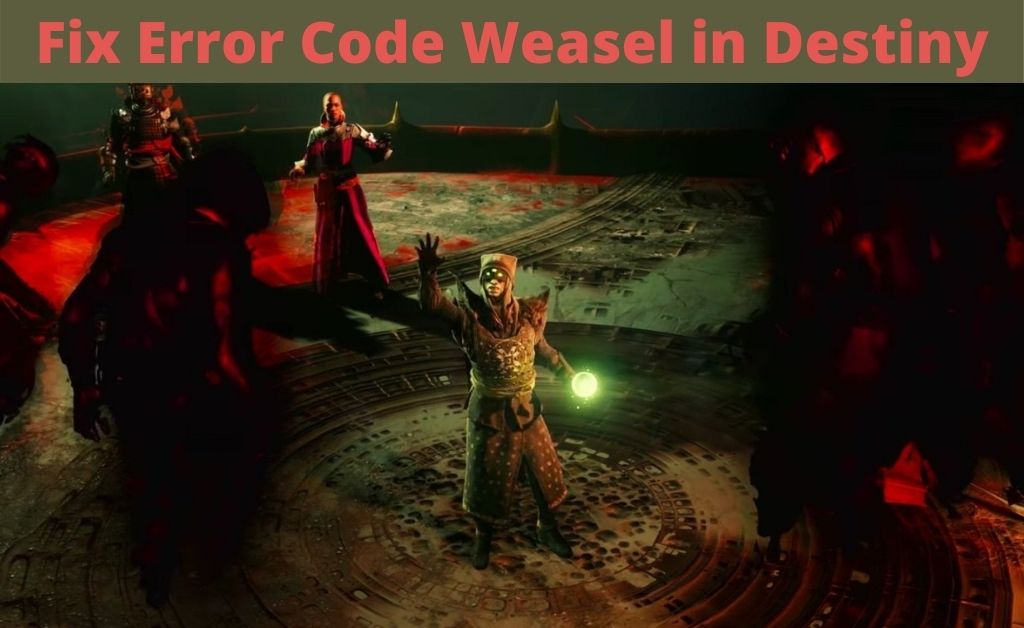 If you enjoy playing online games and are familiar with them, you must have played or at least come across Destiny. This is one of those games that have gained huge popularity among gamers. If you haven’t already, you have to try it out someday.

However, today it is about a part of the game that’s as disliked by the players as the game itself is liked. If you have played the latest instalment, you might have guessed by now that this is about the error code weasel. It is probably as much talked about as the game itself. You’ll find a large number of discussions on online forums about how to fix this issue.

Players are fed up with it, and you can easily understand why. If you belong to this category, do keep reading for some useful information on this matter.

What is the Error Code Weasel?

For those who don’t know, it is an error that comes up while you’re playing the game. It will often appear when you’ve reached a crucial level. Just imagine you’re about to achieve victory, and then suddenly the game gets disconnected. This is what error code weasel can do to you.

Now, you would be very annoyed by this, but there is a way to deal with it. Before rage-quitting, it would be better that you try some troubleshooting first.

What to do when you face Error Code Weasel?

Did the game show this error code weasel and get disconnected? In that case, you have to resolve it, at the earliest. Otherwise, you won’t be able to play the game again until the issue is fixed. You might feel clueless as to what you must do. However, it’s quite simple and you have to try the following:

When the game shows an error code weasel, it’s not necessarily due to a big problem. Since it is multiplayer, it requires a good internet connection. If there are any problems with that, it’s bound to get disconnected.

In such cases, there’s nothing to worry about. Fix the problems associated with the internet connection, if any, and you can get back in the game. Are you using a wireless connection? Then, you might want to try using a wired one. That might be quite helpful in improving the connection.

As you might know, the cables you’re using play a crucial role in the internet connection. Some of them are simply outdated to be used for online gaming. In case you have one of those, you might want to consider getting one with better quality. You would surely see a significant change in your gaming experience.

Are you playing the game on an Xbox? Then, you probably enjoy it a lot as it’s perfect for a console. However, you can get the error code weasel in this case as well. If there’s a lot of cache lying in the device, it can hamper the gameplay. So, if you’re facing this issue, you might want to check if there’s any cache that is to be cleared.

Now, there’s no option to do that in the system. So, if you’re wondering how to do that, it’s quite simple. Shut down the console by holding down the Power button. Then, remove the power cable from it. That’s all you have to do to clear the cache. Once you’re done, simply power it back on and check if the issue is solved. In case it isn’t, you might want to check the internet connection.

To keep the players updated, Destiny also has an app that can be linked to phones. You might have got one yourself. Strangely, this could be the reason why your game shows the error code weasel. Now, you might wonder how an app on your phone can be related to issues on your gaming console or PC. Well, let’s just say there’s no explanation found yet for that. You’ll find a lot of players saying on the internet that removing the Destiny app fixed their connection issue.

So, you might want to try this, if other methods don’t work. And, there can only be one process to find out. However, removing doesn’t mean just uninstalling. You have to go to the account settings in Bungie.net and unlink it from your phone.

Since this game allows forming different clans like most online games, you might have received many invites. You have to make a clear decision about whether you want to accept or reject them. If you’re not going to accept a request, you must delete them. Because it can otherwise cause the game to show an error code weasel. That is what a lot of players have reported. So, if you’re facing this issue and have a lot of pending invites, try clearing them.

A lot of players are facing problems due to the error code weasel, in the latest Destiny game. Being so popular, the bugs in the game would hopefully be fixed, then you might have a better experience. Until then at least, you would have to rely on the tips given here to solve the issue.