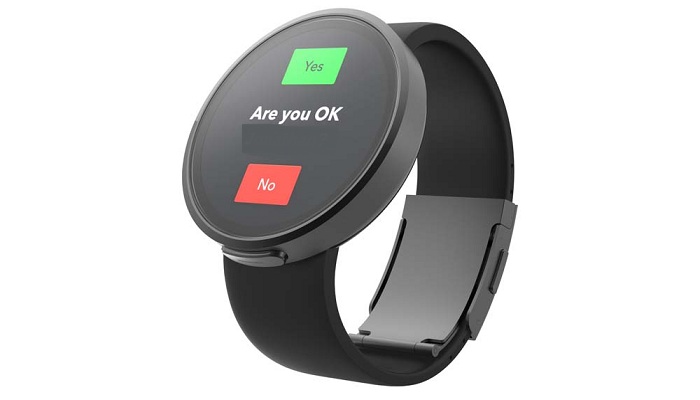 Many users are not sure about the smartwatches. Many enthusiastic consumers felt happy about the product, but after a few months of use, those finds a place in the drawer. However, iBeat Heart watch claims that consumers will be faithful about their wearables if their lives at stake.

The device launched last week, the usual purpose of wearing this smartwatch is telling the time like as usual. Although the real purpose of the watch will be visible if the watch’s sensors detect the sign of cardiac arrest.

In that case, the dial head will be replaced by a strange question: “Are You Okay?” Then the touch screen allows the user to respond back to the question either by yes or no. Responding Yes bring back the watch in the normal mode of telling the time. On the other hand, if you respond with No, then the system will notify the emergency contact set along with that, iBeat dispatch office. Then they will call the emergency number.

The primary motive of this smartwatch is to help the people who are already at risk. Probably they might get caught in an accident. That might occur when Heart’s electrical system malfunctions and heartbeat stop counting. The watch is designed for those so that they can be monitor continuously.

Keeping the round the clock requirement, the company designed the watch, so that it can be wear while jogging and even going for dinner. Otherwise, those who want it simple they would not prefer to wear it.

iBeat first gained the attention, in 2016 with the Indiegogo. iBeat promised to start their first shipping in 2017 summer. They miss out on a number of opportunities to launch their first release.

There were some significant changes in the companies business plan, that resulted in the delay. The software designer, Howard was initially wanted to give away their the software for existing smartwatch brand. For instance, Apple smartwatch or one of their competitors.

But during the testing, some glitch was observed in the system. Making a false statement, so they decided to stop the production and devote some time to make it perfect.

Instead of designing the watch for other competitors, the developers focused on making it for a single purpose. They started working on making the sensor perfect so that they can meet their own standard. Once the technology is set and ready to go for production, they started the production making it available in China. But that took a little longer than usual.

The watch uses a special type of sensor to detect any imbalance. But they had to optimize the technology so that it can reduce the power consumption without compromising with the result. Along with they have to make it comfortable for all types of skin and body type.

The technology uses an optical sensor to measure the pulse rate and blood oxygenation level. A shining light passes through the skin measuring the weaving length of the flowing blood.

To make the sensor a valid one, they studied the technology with the scholars from the University of California. They use multiple redundant sensors in the watch to ensure comfortable contact with the skin, and therefore bring out the reliable result.

For a continuous monitoring, it requires a long battery life, to cope up with this it uses a technology which allows automated mode shifts from high to low preference based on the sensor. Once the battery charged fully, then you can count on it for at least three days.

A recent study report has revealed the fact, by the end of 2025 there will be a huge change in the medical field. Today the demand is drastically changing for medical alert equipment. Some of the existing alert systems relate to the earlier backdated technology.

Which works around 200 to the 300-meter radius of the house, that means life imprisonment. Breaking the wall, iBeat is gaining the popularity which you can use anywhere, it will monitor you constantly and in case of emergency, it will send a notification to the emergency contact as well as in the dispatch office.

iBeat brings the change with its new innovation by using the advanced sensor to detect the cardiac problem and also notify to the emergency contact for a fast action.